The SBVA currently consists of the Governor, as Chairman, and representatives from veterans’ organizations in Alabama, namely: The American Legion, Veterans of Foreign Wars, Disabled American Veterans, AMVETS, American Ex-Prisoners of War, Inc., Vietnam Veterans of America, Military Order of the Purple Heart, Military Officers Association of America, and the Marine Corps League.

The ADVA, acting through the state service commissioner, is the designated agency of the State of Alabama to represent the state and its veterans before the U. S. Department of Veterans Affairs (USDVA) or any other agency dealing with the interest of veterans.

It is the duty and purpose of the ADVA to fully develop and maintain a comprehensive statewide veterans assistance program; to assist the veteran and his/her dependents in all of their problems and to inform them of their rights and entitlements under current law. It is the duty of the commissioner to cooperate with all other departments of the State of Alabama in coordinating plans and programs of state agencies that affect veterans and their dependents. The ADVA through its commissioner provides a central point of contact between federal agencies dealing with the problems of veterans.

It is the duty of the state service commissioner, assistant state service commissioners, and VSOs to inform members of the Armed Forces, veterans, and their dependents of all federal, state, and local laws enacted for their benefit. To aid all residents of the State of Alabama who served in the Armed Forces of the United States, their relatives, beneficiaries, and dependents to receive from the United States and the State of Alabama any and all compensation, pension, hospitalization, insurance, educational, employment pay and gratuity, loan guarantee or any other aid or benefit to which they may be entitled under current laws or laws to be enacted. Veterans in Alabama have the advantage of being in the position to personally contact and receive service from the VSO near the veterans’ home.

There is no charge to any individual for any service performed by the Alabama Department of Veterans Affairs. 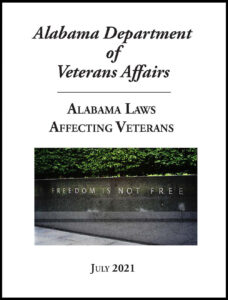