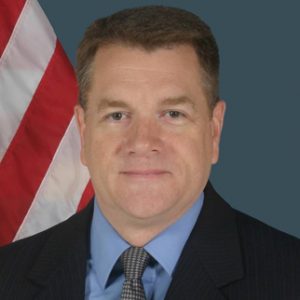 Rear Admiral W. Kent Davis, USN, (Retired) became the seventh State Commissioner of the Alabama Department of Veterans Affairs on February 19, 2019. As Commissioner, he manages the agency’s operations, coordinates mission execution and oversees 120 state employees in 67 counties as well as over 900 contract health service providers. He also manages an agency budget of over $100 million as well as state benefits and services for Alabama Veterans and their families.

Commissioner Davis comes to the department from Maxwell AFB, where he served as the first Chief Communication Officer for the Commander and President, Air University. He was in charge of the communication and outreach efforts in support of all Air Force education programs presented by Air University.

Mr. Davis was born in Montgomery, AL and earned his Bachelor of Science degree in Business Administration from Louisiana State University and a Juris Doctor (magna cum laude) from Georgia State University College of Law. He is a former editor-in-chief of the Georgia State Law Review. He has published numerous scholarly pieces in legal journals, college textbooks, and defense publications, including “Protecting a Criminal Suspect’s Right ‘To Be Let Alone’ in the Information Age,” “Swords Into Plowshares? The Dangerous Politicization of the Military in the Post-Cold War Era,” and Chapter 6 of the legal textbook Sports Law and Regulation.
Mr. Davis is an accomplished leader with more than 30 years of senior communication, management, legal, and military experience, retiring in 2016 as Vice Chief of Information for the Navy at the rank of Rear Admiral (Lower Half).

He was commissioned as a supply corps officer through the Navy’s Officer Candidate School and served as an assistant supply officer aboard the U.S.S. Missouri and an aviation supply officer at Naval Air Station Atlanta. Mr. Davis transferred to the public affairs career field and served in San Francisco and aboard the U.S.S. Abraham Lincoln. He deployed to the Persian Gulf for Operation Southern Watch and to Somalia in support of United Nations peacekeeping operations. He transferred to the Navy Reserve and was assigned to the Navy Office of Information Southeast in Atlanta.

Mr. Davis returned to active duty via an inter-service transfer to the U.S. Army Judge Advocate General’s Corps and served as trial counsel and administrative law attorney. He returned to the Navy Reserve upon discharge from the Army.

He also served as Director of Economic Development & External Affairs and City Manager for the city of Anniston, Alabama and for 14 years in the US Department of Homeland Security (DHS) as a senior attorney and executive. Prior to his job with DHS, Mr. Davis worked for two years as an attorney at the distinguished law firm of King & Spalding in Atlanta. Among many other deployments, in 2006 and 2012 he completed lengthy combat zone deployments in conjunction with the wars in Iraq and Afghanistan.

His military honors include a Legion of Merit medal, a Defense Meritorious Service Medal with an oak leaf cluster and a Navy/Marine Corps Commendation Medal with three gold stars. Additionally, he received Georgia’s 2017 most powerful and influential attorney award from Women Works Media Group for his work in establishing the Freedom Riders National Monument.