The Partners of Alabama’s Challenge are pleased to announce Hoover will serve as the next stop on a statewide tour of veterans well-being town halls. 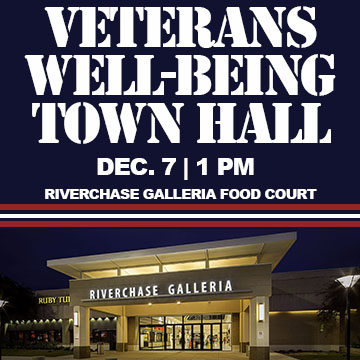 The event is scheduled for Wednesday, December 7 at 1 p.m. in the food court of Riverchase Galleria.

At the town hall, veterans and the community will have an opportunity to hear from a host of federal, state, and local resources while learning more about the new 988 crisis line, VA programs, QPR training and more. Veterans, service members, loved ones, and members of the community will also have an opportunity to ask questions to panelists and have one-on-one conversations with service providers.

The statewide town hall events are inspired by a statewide effort called Alabama’s Challenge for Preventing Suicide Among Service Members, Veterans, and their Families (SMVF), which aims to combat the continuing stigma veterans face with mental illness. Recently released data shows 143 veterans in Alabama died by suicide in 2021, which is a rate higher than the national veteran average and significantly higher than the national civilian average. Previous town halls have been held in Dothan, Mobile, Tuscaloosa, Huntsville, and Montgomery.

You can learn more about Alabama’s Challenge and veterans well-being resources by visiting vetsforhope.com.