Alabama’s Challenge for Preventing Suicide Among Servicemembers, Veterans, and their Families (SMVF) is an initiative aimed to create an impactful, long-term outcome across the state as we continue fighting a stigma with mental illness.

Psychological Health Resource Center
866-966-1020
24/7 phone, chat, email for Service members, veterans, family members, clinicians, commanders, or anyone with a question about psychological health in the military.

Military One Source
1-800-342-9647
24/7 confidential phone and chat for Veterans, service members, and their families 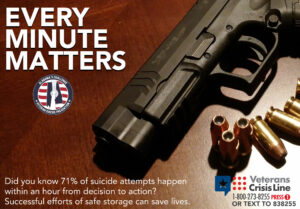 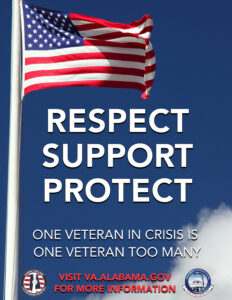 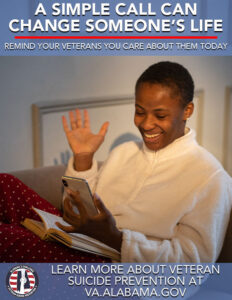 Alabama’s Challenge is an aligned effort between the legislative Task Force on Veterans’ Suicide and the Governor’s Challenge to Prevent Suicide Among SMVF, which share a significant overlap in goals and team membership. The efforts were aligned in March 2021 through HJR 28, which also extended the Alabama Task Force on Veterans’ Suicide created by HJR 151 through the last legislative day of the 2022 Regular Session.

HJR 151, which established the legislative Task Force on Veterans’ Suicide, was proposed by Rep. Neil Rafferty and passed in May 2019. Rep. Rafferty, a Marine veteran, saw a need to investigate the causes of and prevention of suicides among veterans after a friend and fellow Marine veteran died by suicide.

Recently released data shows nearly 18% of those who died by suicide in Alabama are veterans, though only 9.1% of Alabamians have served. Male veterans die by suicide at a rate 1.3 times higher than civilian counterparts, and for women veterans it is 2.1 times higher.

This crisis led to the creation of Alabama’s Challenge, an initiative targeted to inform SMVF of resources to ultimately prevent suicide.

In early 2020, Alabama was invited by the U.S. Department of Veterans Affairs and Substance Abuse and Mental Health Services Administration (SAMHSA) to participate in the Governor’s Challenge. The well-established program has three specific focus areas:

As the initiative continues to grow statewide, a focal point will be hot spots for suicide in Alabama, which will be identified through “heat maps.” Branding campaigns are being created and implemented for Alabama’s Challenge and public and private sector partners are being contacted to provide further resources for suicide prevention.