The Partners of Alabama’s Challenge are pleased to announce the City of Huntsville will serve as the next stop on a statewide tour of Veterans well-being town halls and resources fairs.

The event is scheduled for Wednesday, Sept. 28 starting at 2 p.m. at the Jaycee Community Building.

The town hall is inspired by a statewide effort called Alabama’s Challenge for Preventing Suicide Among Service Members, Veterans, and their Families (SMVF), which aims to combat the continuing stigma Veterans face with mental illness. Recently released data shows 143 Veterans in Alabama died by suicide in 2021, which is a rate higher than the national Veteran average and significantly higher than the national civilian average. 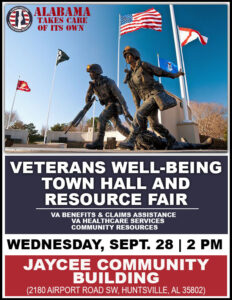 The town hall will feature a host of guests, including Redstone Arsenal Garrison Commander Col. Brian Cozine. Alabama’s Challenge Co-Chairs retired U.S. Army Maj. Gen. Paulette Risher and retired U.S. Navy Rear Adm. Kent Davis will provide an overview of the statewide initiative and a panel of community, state, and federal representatives will discuss their services and answer questions from the community.

“We are thrilled to have the City of Huntsville, Redstone Arsenal, and the Veterans community join the Partners of Alabama’s Challenge to have this important discussion and event,” said Davis, who also serves as the Commissioner of the Alabama Department of Veterans Affairs. “Huntsville has such a rich military history and one of the largest Veterans populations in the state. Suicide prevention is never an easy subject, but through unity we can work to overcome its challenges.”

Veterans attending the resources fair will have the opportunity to meet with ADVA representatives and apply for VA benefits, file for VA compensation and pension claims, and access healthcare services.

Alabama’s Challenge is an initiative aimed to create an impactful, long-term outcome across the state as we continue fighting a stigma with mental illness. Raising awareness of suicide prevention can help us understand the cause and circumstances that lead to mental health issues in general. The ADVA is a lead agency within Alabama’s Challenge and assists with connecting with SMVF to provide information and knowledge about suicide, provide support, and provide resources and options to deal with PTSD and crisis situations.

You can learn more about Alabama’s Challenge and Veterans well-being resources by visiting vetsforhope.com.