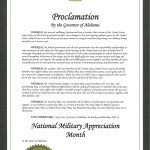 With Loyalty Day on May 1, Victory in Europe Day and Military Spouse Appreciation Day on May 8, Armed Forces Day on May 16, and Memorial Day on May 25, this is a significant month for the military.

The proclamation observes the sacrifice, courage, loyalty, and patriotism of our nation’s servicemembers, veterans, and their families, and encourages the people of the state to dedicate themselves to the values and principles for which Americans have served through the history of the nation.

In these challenging times, May offers a time for national unity to honor, recognize, remember, and appreciate all those who have served, and continue to proudly serve our grateful state and nation.

National Military Appreciation Month was first declared by Congress in 1999 as a month-long observance honoring the sacrifices of the United States Armed Forces.