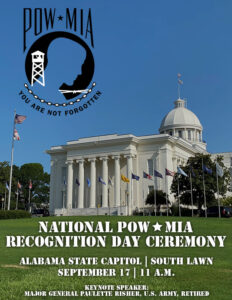 A ceremony to commemorate National POW/MIA Recognition Day will be held on the South Lawn of the Alabama State Capitol at 11 a.m. on Saturday, Sept. 17.

U.S. Army Major General Paulette Risher will give the keynote address. Risher is twice retired, once as a civilian Organizational Psychologist with the U.S. Air Force and once as a Major General (2-Star) in the U.S. Army with 34 years of active and reserve service.  She was the first woman to serve in U.S. Special Operations Command as a flag officer. When she returned to active duty after 9/11, Risher served as the President of the Joint Special Operations University and the Deputy Commanding General for Mobilization and Reserve Affairs.

The ceremony will include the raising of the POW/MIA Flag, feature patriotic music, a wreath laying ceremony, and the playing of Taps. Traditionally held on the third Friday in September, the ceremony was moved to Saturday to accommodate and encourage public attendance.

The observance is one of six days of the year that Congress has mandated flying of the POW/MIA flag at federal buildings. The Alabama Legislature passed legislation in 2008 that allows for the POW/MIA flag to be flown at state buildings as well.